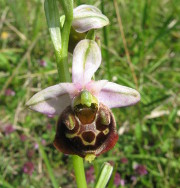 This website contains photo's in stereo of many European Orchids.

Important: Do not pick or dig out. Do not damage.

when they remain, others can enjoy them too.

Afterwards: To see the stereo photo's: click on "plant", "spike" or "flower". Screenresolution 1280x1024, or at the right below set-up a lower percentage.

In colorful orchids sometimes the colors are absent, then they have only green and white, this is called "albiflora"; click on "Albiflora schema", below.

To see the photo's really in stereo, a stereoviewer is needed, for example the Loreo Pixie viewer(4 euro) available at www.fotografie-in-3d.nl, or the 3dscope(32$) or the Poke Scoop(40$) The last 2 give larger view. Order via www.berezin.com.

I did take all the photo's myself in the European nature; publication is not allowed; they are only for private use.

The orchis is possibly the largest European family of plants. Orchids grow in many different countries and parts of the world. In Europe every country does have at least some species. The orchids are in the evalution a relative young family of plants. The appearance of an orchids is nog really stable, and there are a lot of hybrids; intermediate forms, which makes the determination more difficult.

Generally speaking orchis are recognizable by the leaves with parallel veins, and a flower that consists of three rear leaves, the so called, sepals and three front leaves, the so called petals, that are positioned transverse. De foremost petal usually forms a showy lip. There are many orchids with very beautifull flowers (for example. the Ophrys fuciflora and the Bee Orchid), but there are also very unwitnessed orchids, like the heartleaf twayblade or the broad-leaved helleborine.